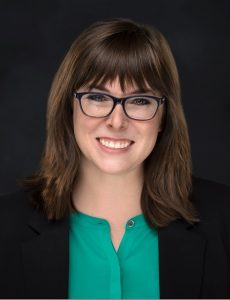 Kristen is a compassionate advocate who is willing to put in the time to get to know you and your case so that she can effectively fight for a fair result. Kristen’s primary practice areas are family law and personal injury, where she represents injured plaintiffs in accidents, wrongful death, slip and falls, dog bites and insurance coverage disputes. She also handles some criminal defense and employment matters.

Kristen is admitted to practice law in the State of Wisconsin and the United States District Court for the Western District of Wisconsin. She is a member of the State Bar of Wisconsin where she is heavily involved in the statewide high school mock trial program as Chair of the Casewriting Committee, as an Advisory Committee member and a judge. Her participation in the mock trial program earned her and the rest of the casewriting team the State Bar of Wisconsin Public Education Volunteer of the Year Award in 2018. Kristen is also an active member of the Wisconsin Association for Justice, serving on the Board of Directors and participating in the Women’s Caucus. She is also a past-chair of the New Lawyers Section. She has given many presentations and authored articles discussing various aspects of the law. She is the most recent past president of the Marathon County Bar Association.

Kristen and her husband love living in Wausau with their young children and dog. Kristen’s interests include spending time with family and friends, participating in the many community activities Wausau has to offer, supporting local farmers, enjoying music and exploring the outdoors.